In June 1944, the world was a different place.  Young men were getting ready to hit the beaches of Normandy, France (http://about-france.com/regions/normandy.htm) to fight and protect the world from Hitler’s domination.  These soldiers were 18, 19, 20 years old and were leaving their parents, wives, children, friends and family behind to head off to another country to fight the biggest evil ever known to man. 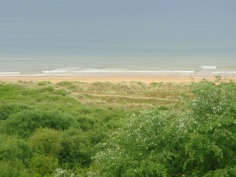 On the early morning of June 6, 1944, U.S. troops stormed Omaha Beach, a six mile stretch of beach that was backed by a seawall 10 feet high and overlooked by cliffs that were almost 100 feet high.  Many soldiers drowned during the approach from ships offshore or were instantly killed as they neared the shoreline by German troops that were defending the beaches.  But many more trudged forward in the pursuit of freedom.

A few weeks ago, my husband Bennett and I were honored to be able

to visit this area of France and learn more about this important day and time in history.  Early in the morning, we took the 2.5 hour train from Paris to Caen and then grabbed a taxi to the Normandy Memorial Museum (http://normandy.memorial-caen.com/).

statue) on the outside but on the inside educated and reminded us of the horrors of this war and Hitler and the bravery and courage of the Allied Forces.  Memorial gardens, exhibits, photographs, remains of weapons and buildings and transportation vehicles were all prominently displayed and helped to tell the story of the Normandy invasion.

The flags out in front of the museum reminded us of the vastness of this military invasion as armies and soldiers from the United States, 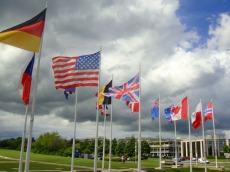 Great Britain, Canada and many other Allied countries all worked together to stop Hitler and his army from further imperialism.  The power of working together has never seemed as prominent and important as it did in this case.

After the museum, we called another taxi and asked him to take us out to the Normandy American Cemetery (http://www.abmc.gov/cemeteries-memorials/europe/normandy-american-cemetery ).  The entire 1 hour taxi ride 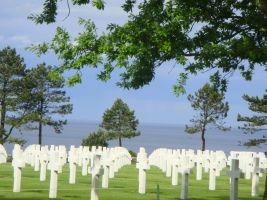 was through rain and storms and the driver kept asking us if we had our umbrellas.  But upon arrival at the cemetery, the skies cleared up and we had blue skies and sun shining through during our entire visit.  This 172.50 acres cemetery was established in 1956 by the United States

and contains the graves of 9,387 of our military dead, most of whom lost their lives in the D-Day landings and ensuing operations.  The cemetery also features the Walls of the Missing which are inscribed with 1,557 names of the missing in action and a memorial consisting of columns in a semi-circle and a large bronze statue, “Spirit of
American Youth Rising from the Waves.”

spaced and in straight rows horizontally, vertically and diagonally just tore at your heart, reminding you of everything that our countrymen  and fellow allied partners gave up that day to ensure world peace and our future.

You could see the rough beaches, brush and rocky shorelines from

the cemetery that the young men had to struggle to reach the shore to start fighting for our freedom. It wasn’t an easy journey but one that they felt was worth the sacrifice.  And one that we should be eternally grateful for as they helped ensure the better world we live in today, with the freedoms to do what we want to, are ours forever.

As we were walking toward the front of the cemetery to exit, military personnel were lowering and taking down the U.S. flag.  In a few

minutes, a soldier started playing Taps.  Everyone in the cemetery immediately stopped and stood in place to pay tribute to the almost 10,000 soldiers who gave their lives for our future freedom.  There wasn’t a dry eye from Americans and other visitors alike.

The taxi cab then took us over to Omaha Beach where the “Les
Braves” monument (http://www.war-memorial.net/The-Braves—Les-Braves-1.292) presides over the beach.  Commissioned by the French in 2004, it serves as a memorial to the Americans who liberated France.  The beach was deserted as swimming is not

permitted on this memorial beach.

It started drizzling on our way back to the train station in Caen.  But the misty weather just matched our misty eyes and moods as we both contemplated the past horrors that our fellow countrymen had to face during this war and at Normandy.

did, going across the world into the unknown to fight an evil larger than life itself.   Following orders without questioning the why and how, and barreling forward into a battle knowing that death was likely.

June 6th will be an extra special day for us this year after our recent experiences at Normandy.  It also represents the 70th anniversary of

the Normandy Invasion so there will be all types of special commemorations and services at the cemeteries and museums.  But this day should have always been special to Americans because of what was given up to ensure our current freedoms.  Shame on those of us that never completely recognize just how important this day in history is, to America and the world!