Although those 2 words never seem enough as you say them, to a veteran- it’s one of the most honest and genuine things you can hear. On this Veteran’s Day, our staff members would like to share with you a veteran that they would like to recognize and thank for their service and commitment to our wonderful country.

I would like to send my love and appreciation to Bernard Wolf Mandel, my grandfather, who passed away last year on September 26, 2013. He served his country in the Army during World War II, rising to the rank of Technical Sergeant. In the army, he specialized in the disarming of mines,

volunteering for assignments that resulted in saving 15 wounded men and earning him a Bronze Star and two Oak Leaf Clusters. Returning home in 1945 Bernie quickly started what he always considered his most important endeavor, his family. Miss you Papa!! – Deborah Mandel

I want to thank my grandparents, William and Alice Nowell, for their military service.  William was a cook in the Army, often joking, “I killed more men than the enemy with my cooking.”  He participated in the D-Day Invasion in Europe alongside his brother, and

both made it out alive.  Alice was a proud United States Navy veteran, serving during World War II with the WAVES.   While both have since passed, their influence, strength and loyalty to the nation have helped me to become the person that I am today. – Kristi Spargo

I would like to give a thank you to Jack Sobol, my grandfather who served in the Army during World War II in Germany. At 91 years old, he still shows strength and determination that he learned from the military at such a young age.

Another special thanks goes to my other grandfather, Sgt. Joe Gilmer who also served in the Army. During the late 1960s he too was stationed in Germany as an E5. I’m extremely grateful for what my grandfathers have done as well as the service of several of my granduncles and cousins. – Shelly Sobol

I would like to thank and remember my dad,

Bennett E. Napier, who is no longer with us. He served honorably in the U.S. Navy during the Korean War. He served on the U.S.S Oriskany, . The movie Bridges at Toko Ri was shot on his ship during his service, http://www.imdb.com/title/tt0046806/

I would also like to thank my step dad, Tom Fincannon, who served 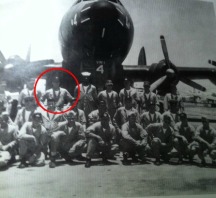 our country for over thirty years total, both in the U.S. Navy during Vietnam as part of reconnaissance aircraft missions, and reserve and active duty with the National Guard including service during Operation Desert Storm.- Bennett Napier.

Thank you to my father, former Petty Officer 2nd Class, Thomas Downs for his sacrifice and service to our country.  He was in the Navy special warfare group called “Beach Jumpers” and served in Vietnam.  The unit was highly classified and their purpose was to plan and execute tactical deceptive operations on the enemy.   The unit would hit the beach quickly and confuse and deceive the enemy.  They could raid pretending to be and imitating their ally or even the enemy’s own high ranking officers.  Specifically, my father intercepted enemy transmissions, decoded them, and then would respond as if they were the enemy; in this case, the Vietcong.

In addition, I would also like to thank my both my Grandfathers who serviced in the Army and Air Force in WWII and the Korean War.  Many thanks to all the men and women who have served to protect our freedoms.- Kim Barclay

I would like to give a special thank you to my Paw Paw Jack Thomas and Grandpa Jack McGuinn who both served in the Marines during the Korean War. Both were drafted in 1952 and trained at Paris Island, SC.  I would also like to thank my great great grandfather William F. Napier, who fought in WWI. Each Military branch is instrumental for implementing self-discipline and respect .                     – Malarie Barineau

Thanks to all that have served! I want to give a special thank you to three people. First of all, to my wonderful father, John Ferris, that is no longer with us. He served in the Air Force during World War II. Thank you dad!  My son, Matthew Turner also served in the Air Force for 8 years.  I love you Matt and I am very proud of the man you have become. I know the Air Force had a lot to do with helping build the wonderful qualities that I see in you today. Last, but not least, I want to thank Col. Skip Keating that served in the army for 30 years.  Not only did he serve, but he is still serving today, as a volunteer driver at the Dept. of Veteran Affairs. Thanks Skip- I am blessed to know you! – Maureen Turner

Thank you again for all of the courageous men and women who have fought, are fighting and will fight for our continued freedoms.